Samai Nahawand is an oriental style and structure in music which goes back to the Middle East and it's spread in music to Spain which was called Andalusia.

This composition is the first collaboration with the Lebanese composer, Nai player Joseph Karam who has a long history in music performances with prominent singers as Wadi El Safi & Samer Hatoum the composer, orchestrator & conductor with a European vision to demonstrate the glory of Samai Nahawand style orchestrated for the Nai and orchestra to reach out the name Samai Nahawand between the East & West for Nai & Orchestra.

Nai is an old oriental instrument which is distinguished by it's sound, technique and role in music with it's private personality and solo improvisation it can produce and was mostly used for the solos, melodies and specifically for meditation music.

This new composition by Veronica McCarrison called The Hounted Music Box from New Zealand was arranged thematically and orchestrated by Samer Hatoum for Piano & Cello as a part of their collaboration to explore the themes of this New Zealand rising composer .

You can here see the first page of the score below. 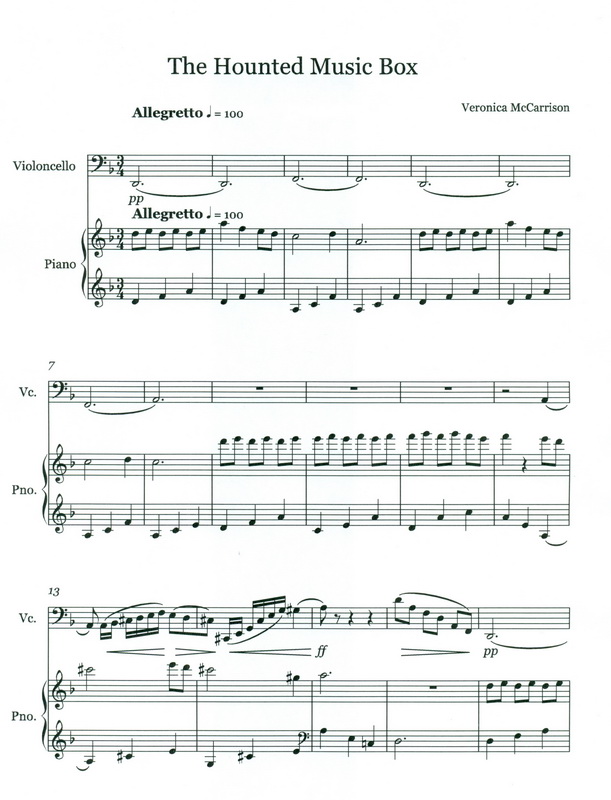 Sarah Wagner is a composer of regular and irregular theme structure bases her imaginations on the free melodic move and free expressions Had her first composition called Re-Quest which was fully organized and orchestrated by maestro Samer Hatoum.

Veronica Mc Carrison is a rising talented composer with original themes and is in collaboration with maestro Samer Hatoum in orchestrating her music for chamber music and full orchestra.

The Lebanese Arabic Oriental Orchestra with it's president Dr.Walid Musallem who is also in charge of the Lebanese Philharmonic Orchestra, it's principle conductor ( maestro Andre Hajj ) and the management member Mr. Raffat Eitani, embraced an invitation to the composer/orchestrator & conductor Samer Hatoum, the Lebanese in origin and based in Ireland-Europe to take part of the success the orchestra had achieved under the mentioned names effort.

The foreseen target of the orchestra leadership is to open a collaborative and partnership relationship with highly skilled new composers and conductors in Lebanon and the Arab world which led through maestro Andre Hajj love for collaboration and welcoming the new age energy to cross the Lebanese musical border to the Arab region in order to enhance and develop the Arabic classical and traditional music from it's stagnancy to the public's attention.

The Lebanese Arabic Oriental Orchestra performed a theatrical concert in Beirut in December of 2016 under the baton of maestro Andre Hajj a collection of music composed and orchestrated in a new orchestral version by maestro Samer Hatoum in the first half and a Lebanese popular angelic voice presented by Karla Ramia in the second half. This concert provided the orchestra with a new look at the orchestral standard and built a musical bridge with Europe.

The first half of the concert started by an introduction and welcome speech by the president Dr.Walid Musallem , then a speech by maestro Andre Hajj when he introduced maestro Samer Hatoum for the first time with the program.

The program was listed and performed as follows

The Lebanese Arabic Oriental Orchestra performed with the following