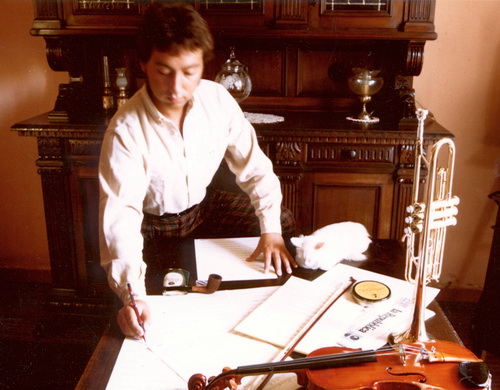 Sandro G. Masoni is an Italian composer who has his color and way in composition, Sandro G.Masoni participated in the recording session with two new compositions with the Danube Symphony Orchestra in Budapest conducted by Maestro Samer Hatoum.

Sandro G. Masoni studied at the Conservatory of Music (in Cagliari, Sardinia, Italy, where he was born a thousand years ago circa), outside the Conservatory, and pretty far from the Conservatory. He co-founded the Gruppo di Espressività Sonora (avant-garde music), the Nuova Orchestra da Camera di Cagliari, the New Jazz Symphonic Orchestra, Il Rasoio di Ockham (folk-jazz-rock-flamenco), and the Drink-the-Moon Sextet (electro-acoustic contemporary).  Several compositions of Sandro’s were and are performed live and also broadcast by national radio and TV stations.  He published CD albums such as "la strana poesia della vita" and "Istmi".

Random Act of Kindness is one of his compositions, below is an excerpt of the recording.
Mecuppatea is other composition was performed by the Danube Symphony Orchestra and conducted by Maestro Samer Hatoum.

Random acts of kindness is an 18-minute (or so) composition for strings – long and (I’m told) complex enough to justify making two abridged versions of it; one richer with rhythmic patterns, the other richer with melodies.

In any case, the quasi-palindromic form of this composition is supposed to suggest the idea of a rather long and vast journey, from which the traveller returns somewhat changed. The concept of journey would seem particularly appropriate, in fact, since all versions of Random acts of kindness present certain melodic/harmonic intervals and short sequences which are regularly found in the music from very distant places – from the Far East to the New World.

These very same intervals and subphrases are actually favoured by very different musical traditions from dramatically distant regions in the world; but we might not notice such similarities, because these elements do acquire a different taste, so to speak, when occurring within a particular musical context instead of another (and, also, our minds tend to compartmentalize). In this composition (even more than in other works of mine), such elements – these “least common denominators” – constitute building material for bridges linking sections somehow reminiscent of musical traditions belonging to a particular region with sections reminiscent of different musical traditions from another – very distant – part of the globe. And then back; but slightly changed, having experienced the previous parts of the journey.

The title “Mecuppatea” means, of course, “my cup of tea”, but is also supposed to sound like the name of a character (a princess, perhaps?) from a classical myth, or a novel, or a theatrical play, if not like the name of the playwright herself – or maybe of an ancient philosopher, or poetess, or scientist. Not really a definite character.  Hence the two main melodies; the first somewhat more classical, the second somewhat more romantic – both, in turn, are my cup of tea. As definitely are some rather incisive rhythmic patterns, with their repeated dissonant chords, the various quasi-crescendos, and the microvariations. Also “my cuppa” is the quasi-palindromic structure of the piece.

In fact, I resorted to this form for several compositions of mine, e.g. my second String Quartet, Avvidecci, and Random acts of kindness.  Mecuppatea particularly relies on the physical quality of sounds. In the opening measures, where a certain rhythmic strength is delivered, I avoid the usual harmonic connotations, mainly by not including major or minor triads – so that the listener may focus instead, with as little effort as possible, on the rhythmic patterns and the changing intensity of sound. In the following section, in order to solicit particular attention towards the melody and the counterpointing instrumental voices, the harmony is finally clear – very little ambiguity is left – but is kept simple. Then Mecuppatea mostly develops with the usual abundance of melody, harmony, rhythm, and nuances.